If you have been in the market recently for a new washer you would have noticed it’s not all toggle dials and mechanical buttons anymore. Today’s latest models offer a plethora of digital features along with impressive eco-friendly options. These features and benefits go well beyond the cosmetics but down to the engine room of what drives a modern day washer. Here are some things to consider when choosing between a belt driven washer as opposed to direct drive.

There are two basic designs for the modern washer direct drive and belt drive. Direct drive meaning the pump and engine are actually connected directly to each other. Belt drive, on the other hand, have these systems separated by a series of belts and pulleys.

With a direct drive system on your washer, the pump runs at the same speed as the engine. Direct drive systems have an advantage over there belt driven cousins because there is no moving parts and no need for the adjustment of belts or the maintenance thereof and tend to be a smidge cheaper initially.

After hearing about the efficiency of the direct drive you’ve got to be thinking what could be better than that they are quite have less moving parts etc. Well, don’t count out the old girl yet. Belts and pulleys may not be the newest game in town but I’m here to tell you there far from gone.

Belt drive washers use belts and pulleys to regulate the pump and control speed.Belt drive washers can run significantly lower pump speeds than direct drive over 2000 rpm in most cases. This creates a lot less friction and lower operating temperatures which inevitably means an extended life of your machine.

To sum up you can expect a longer life out of the belt drive due to the lower pump speeds and operating temps. The direct drives require less maintenance as there are no belts to replace or tension. In the end, it’s a lifestyle choice between set and forget or be prepared to replace a belt here or there.

With having combined experience of over 47 years, we provide our help and expertise for 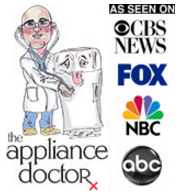 When your stainless steel fridge is starting to look like a kids finger painting its time to grab a spray bottle and fill it with water. Spray down the desired area thoroughly after that take a microfiber cloth and work your way from the top down in an S pattern working with the grain of the steel to prevent scratches. Once the smudges and grime are gone flip the cloth over and give it a good dry buff. This action will give you a consistent sheen and remove any remaining water marks.

Occasionally you will encounter stubbornly caked on grime where water and elbow grease simply won’t cut it. In this case, mix one part vinegar and one part water to your water bottle and repeat the process. Vinegar acts as a natural cleaning agent making it safe to be around food and it can be kept in the refrigerator to clean spills on the fly when needed.

Appliance Doctors all About The Shine

Once you have your stainless steel appliances sparkling clean its time to make them shine. The process to do this is the same as the previous cleaning action except for this time we are going to use rubbing alcohol or even a cheap vodka. Yes, that’s right the vodka can come out of the fridge and on to the cloth. The alcohol drys super fast and leaves a streak-free finish. Mix one part alcohol and one part water into the spray bottle start from the top and rinse and repeat.

With having combined experience of over 47 years, we provide our help and expertise for